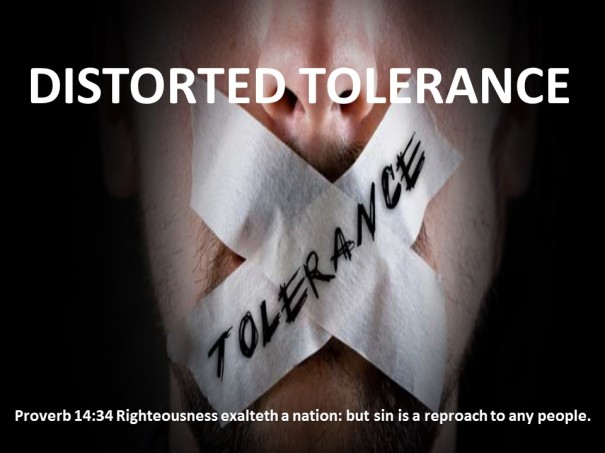 Proverb 14:34 Righteousness exalteth a nation: but sin is a reproach to any people.

Tolerance as it is being used in our culture today is destroying the moral foundations that made Americans and America great. Psalm 11:3 says, “If the foundations be destroyed, what can the righteous do?” Proverb 14:34 declares that, “Righteousness exalteth a nation: but sin is a reproach to any people. Tolerance from Webster’s dictionary means: to allow or permit; to recognize and respect others beliefs and practices without sharing them; to bear up or put up with someone or something not necessarily liked. According to the definition by Webster it implies you cannot really be exercising tolerance unless you disagree with someone.  I see tolerance involves permitting or allowing a conduct or point of view one disagrees with while respecting the person in the process. A Christian should have no problem with that for it runs similar to the Biblical principle of forbearance or forbearing one another in love (Ephesians 4:3; Colossians 3:3).

Today that is not the culturally liberal view of tolerance. If you think someone is wrong about anything and voice your disagreement you are intolerant. The new tolerance aims to silence all opposition and all disagreement. Tolerance in these perilous last days’ means: you must approve of what I do; you must agree with me; you must allow me to have my way and not hinder me. The new tolerance means we have to consider every individuals beliefs, values, lifestyle, and truth claims as equally valid. They not only say that everyone has a right to his beliefs but all beliefs are equal. The new tolerance goes beyond respecting a person’s rights, it demands praise, endorsement, and acceptance of that person’s beliefs, values, behaviors, and lifestyle. That kind of tolerance says there is really no right or wrong, no absolutes, and thus no morality. In this brand of tolerance, instead of good and evil, we are manipulated to talk in terms of “equality, diversity, and tolerance” which totally cuts out or neutralizes moral right and wrong. It is using tolerance to neutralize morality.

It is in reality Cultural Marxism at work in America, which is Marxism translated into cultural terms. In cultures where Marxism is the rule and government, dissidence is punished and the population is beaten down with government oppression. Cultural Marxism is a hammer used to enforce the values of the collective over an individual’s rights. As it gets ingrained in the culture people become afraid to disagree or speak out. People begin to act as if a gag order has been instituted and they begin to self-censor. An invisible censorship gag is placed within the person between his thoughts and what he says.

Many believers are silenced into submission by this perverted view of tolerance. Some insist on living in their “Christian bubble” as though nothing is going on wrong around them. Other Christians are simply just compromising rather than speaking the truth in love and being the salt of the earth. It may be that to them  the danger doesn’t seem great and the cost of obedience seems too high and demanding. As Christians, though, we have to give total allegiance to Jesus and total loyalty to the truth (2 Corinthians 13:8). The truth is in Jesus (Ephesians 4:21).  Standing for the truth may come with a cost, persecution, and suffering but it pays to obey God. Godliness is profitable unto all things, having promise of the life that now is and that which is to come (1 Timothy 4:8). Stand for the truth of God’s moral absolutes. The life that is to come in eternity is a long time to be wrong.