Home › #Abiding › THERE ARE LAWS UNDER GRACE

THERE ARE LAWS UNDER GRACE 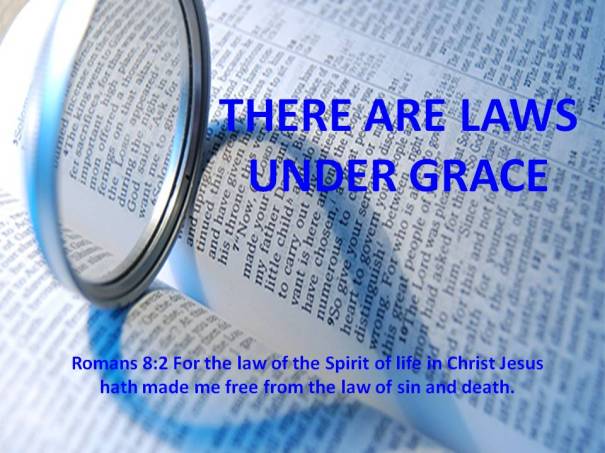 God gave us the Law in the Old Testament through Moses and He gave us grace in the New Testament through Jesus Christ. Christians are now under the New Covenant of Grace that works by faith. Confusion and misunderstanding abounds on the subject of law and the Christian. Christians have not been able to settle their different views on the subject. What laws apply, what laws don’t apply, and are there any laws at all? We seem to go from one extreme to the other, from legalism to lawlessness or from asceticism to lasciviousness. The word “law” is used in many ways in the Bible and we need to observe the context to know what law is being spoken of. The word for law is “nomos” in the New Testament which first means “what is proper” and therefore it comes to apply very broadly to any norm, rule, custom, usage, or tradition. It generally is describing a principle, a regulation, or a principle that regulates.

When we come to the New Testament there are also things called “laws” that are principles or spiritual laws (forces, powers, influences) that can influence a Christian’s life:

They are a part of the teachings of grace or what grace teaches us. Under grace, we don’t make void (destroy or make useless) the Law (Romans 3:31) but we establish (hold up) the validity of what God said was moral in the Law God gave Moses which becomes internalized in us (Hebrews 10:16, 17). With these laws in mind we must keep these three parameters in perspective:

1. The believer is not under the Law of Moses but under grace (the laws under grace rule).

2. The believer is not lawless under grace (dead to the law yet delights in the Law).

3. The believer is not against the Law under grace (the Law is fulfilled in us).