THE REST OF FAITH 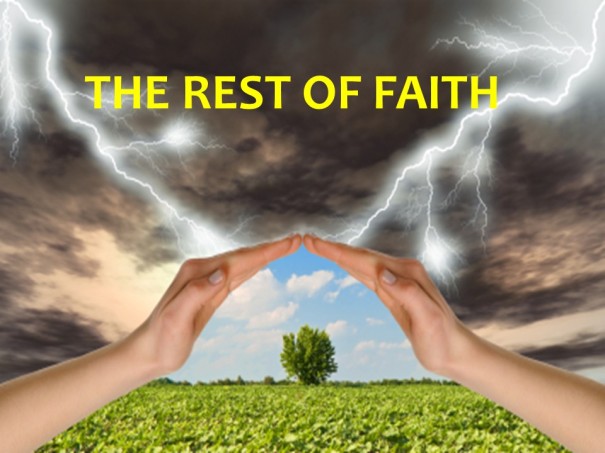 Hebrews 4:9 There remaineth therefore a rest to the people of God. 10 For he that is entered into his rest, he also hath ceased from his own works, as God did from his. 11 Let us labour therefore to enter into that rest, lest any man fall after the same example of unbelief.”

The Christian life is to be a life of faith or living by faith every day. A spiritual rest of faith in His grace is now available to every believer to receive all of God’s provisions due to the work Jesus did.  Jesus, as our Substitute, has worked all the works of God and finished the work of our redemption from sin, satan, and the curse.

The Bible uses the term “rest,” in different ways:

In order to understand the spiritual rest of faith in His grace, it is helpful to see the development of the concept of rest from its beginning. The concept of rest in the Old Testament was introduced with the Sabbath rest first by God at Creation where He blessed the seventh day (Sabbath), sanctified it, and rested because of A WORK WAS FINISHED Genesis 2:2, 3. The Sabbath rest was brought under the Law God gave Moses (Exodus 16:25-30) and was a symbol of God’s Creation rest where after six days they were to rest on the seventh or Sabbath due to ADVANCE PROVISION BEING MADE. On the sixth day He gave them the bread of two days (Exodus 2:29). The concept of rest was developed further under Joshua in conquering Canaan’s Land, the land of promise, where God gave them rest from their enemies due to A DEFEATED ENEMY Joshua 21:43-45.

Although Joshua did bring the children of Israel into the Promised Land, yet this could not be the sum total of the intended rest God planned, because long after this time the Holy Spirit, by David, speaks of this rest (Psalm 95:7-11). God had another day in mind to accomplish the intended rest. God announced in the Old Testament that there was going to come another day (another blessed day) that would make this rest available.  Psalm 118:22-24 describes this day,” The stone which the builders refused is become the head stone of the corner. 23 This is the Lord’s doing; it is marvellous in our eyes. 24 This is the day which the Lord hath made; we will rejoice and be glad in it.” That day was the day the Lord made for our redemption, which we know to be the day Jesus died and paid the full price for our freedom.

This is the basis for the Christian’s rest which incorporates all three of these other concepts of the Sabbath. After that day of our redemption:

Faith gives us access to this rest being brought into our everyday experience every time we believe the facts of our redemption in Christ and every time we lay hold of one of the promises of our covenant.