Home › #Baptism of the Holy Ghost › GOD CAN USE IMPERFECT PEOPLE

GOD CAN USE IMPERFECT PEOPLE 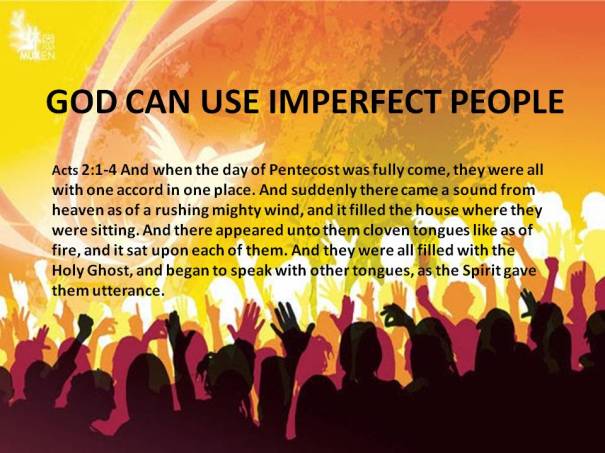 Acts 2:1-4 And when the day of Pentecost was fully come, they were all with one accord in one place. And suddenly there came a sound from heaven as of a rushing mighty wind, and it filled the house where they were sitting. And there appeared unto them cloven tongues like as of fire, and it sat upon each of them. And they were all filled with the Holy Ghost, and began to speak with other tongues, as the Spirit gave them utterance.

Just before Jesus left this earth He left instructions with His followers to continue to do what He began to do and teach (Acts 1:4-8). The baptism of the Holy Ghost, which the disciples received on the day of Pentecost, is the key to doing the works Jesus did and greater works. All that followed in the book of Acts was the outcome of their experience of receiving the power of the Holy Ghost. When Jesus walked this earth His ministry was localized, or wherever His physical body was. The sending of the Holy Ghost brought the ministry of Jesus from a local ministry to a worldwide ministry through His Body, the Church, on the day of Pentecost.

Next to getting saved, it is the second most important spiritual experience every believer should enter into and are actually commanded to do so (Luke 24:49; Acts 1:4,5). Jesus actually forbid them to get out of the city limits until they received the power of the Holy Ghost.

Think for a moment about the place where He gave them this command to wait to be endued with power. This was the city of Jerusalem, and no city was more religious than it; however, Jesus chose to raise up His church in a hard place. The only message they had was about a man that was dead to all in the city. The people He had to work with didn’t make it more promising either. Peter had just denied Him. James and John, the Sons of Thunder, wanted to call lightening down on all who didn’t receive Him. Then, after three and a half years of ministry of miracles and multitudes flocking to Him, only 120 show up for a prayer meeting in the Upper Room. How is He going to raise up the church in a setting like that?

The answer is: He doesn’t need perfect circumstances or perfect people. All He needs is Holy Ghost baptized believers aflame with supernatural power.