Home › #Abiding › AVOID THE WARFARE IN YOUR SOUL

AVOID THE WARFARE IN YOUR SOUL 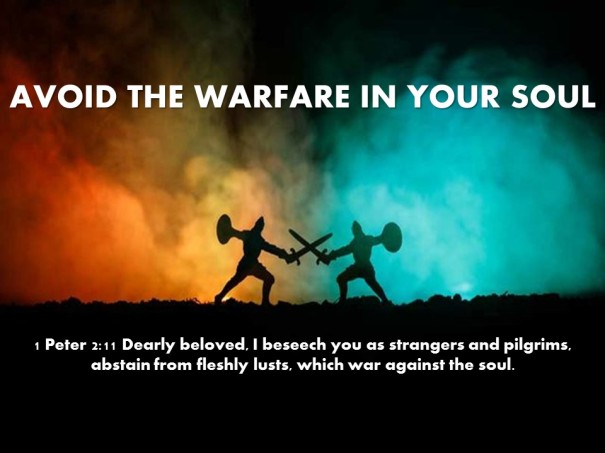 1 Peter 2:11 Dearly beloved, I beseech you as strangers and pilgrims, abstain from fleshly lusts, which war against the soul.

We are exhorted to abstain from (refrain from; hold ourselves from; keep oneself from; to avoid doing) fleshly lusts which war against our soul. The object of every carnal desire, craving, and longing is to bring the soul into captivity. By the grace available to us from the victory purchased by Jesus Christ, we can abstain from every fleshly lust. We do not have to yield and indulge fleshly lusts and sin. It is also never better to sin and get forgiven as it is to sin not (1 Corinthians 15:34). It is a lot easier to just avoid sin. Sure the grace of forgiveness is available but you have to deal with the damage sinning does to the soul and the warfare indulging in fleshly lusts brings with it (1 Peter 2:11).

Some teach don’t worry about sin we’re under grace as if sin is no longer an issue Christians have to deal with. A few suggest that we shouldn’t worry about sinning because if we do we have forgiveness which contributes to saying or  implying that grace is a license for sin. That’s like saying go ahead and wreck your car you’ve got insurance. We don’t have insurance so we can wreck but in case we wreck. True, you can make an insurance claim to cover the wreck but your car has to go to the auto body shop and get the dents banged out. It could be why some Christians aren’t as useful to the Lord as they could be because their time is consumed in mental warfare banging out the dents in their soul due continued yieldedness to sin.

The Bible says in Romans 6:15, 16 “What then? shall we sin, because we are not under the law, but under grace? God forbid. 16 Know ye not, that to whom ye yield yourselves servants to obey, his servants ye are to whom ye obey; whether of sin unto death, or of obedience unto righteousness?” We are not to let sin (its power and lusts) have dominion over us because we are under grace (Romans 6:12, 14). Grace enables us to walk in victory over every and any sin.

We have the grace provision of forgiveness if we sin not so we can sin. 1 John 2:1-2 says, “My little children, these things write I unto you, that ye sin not. And if any man sin, we have an advocate with the Father, Jesus Christ the righteous: And he is the propitiation for our sins: and not for ours only, but also for the sins of the whole world.”

There is grace to empower a walk in the Spirit above the flesh but we need to diligently pursue it. Awake unto righteousness and sin not.