Home › #Abundant Life › JESUS FULLY EXPECTS US TO USE OUR FAITH

JESUS FULLY EXPECTS US TO USE OUR FAITH 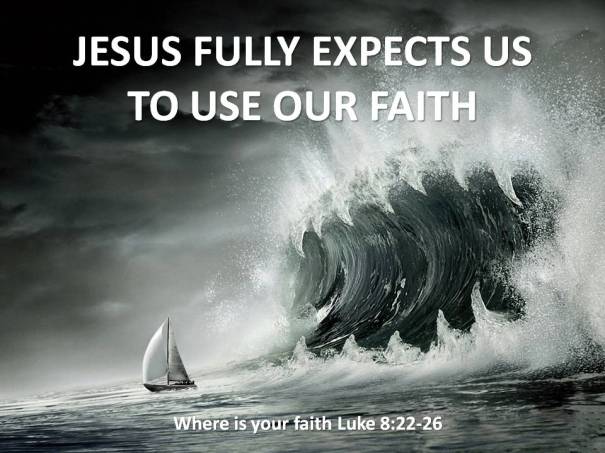 Luke 8:22 “Now it came to pass on a certain day, that he went into a ship with his disciples: and he said unto them, Let us go over unto the other side of the lake. And they launched forth. 23 But as they sailed he fell asleep: and there came down a storm of wind on the lake; and they were filled with water, and were in jeopardy. 24 And they came to him, and awoke him, saying, Master, master, we perish. Then he arose, and rebuked the wind and the raging of the water: and they ceased, and there was a calm. 25 And he said unto them, Where is your faith? And they being afraid wondered, saying one to another, What manner of man is this! for he commandeth even the winds and water, and they obey him. 26 And they arrived at the country of the Gadarenes, which is over against Galilee.”

In Luke 8:22-26 Jesus had given his disciples a word to pass over to the other side of the lake from where they were. It was a part of God’s plan for Him to get there but they had to crossover to get there. God never planned for them to go halfway and sink. As Jesus is asleep, a storm arose and the Bible says that they were in jeopardy. Jeopardy means to be liable to or to face risk of loss, injury, or damage. They call on Jesus and His response was to first rebuke the wind and then rebuke them. He doesn’t say, “Where are the oars, where are the sails, or where are the buckets,” but “Where is your faith?” Was Jesus’ response cruel, insensitive, or mean? No, but He fully expected them to use their faith in the face of risk, jeopardy, and the storm. God does care about what we go through and Jesus as our High Priest is easily touched by the feeling of our infirmities but He awaits an expression of our faith.

What is the whole lesson written here in Luke for? Is it just to show Jesus’ mastery of the wind, waves, and sea? I don’t think so. If you will read what happened once they went to the other side of the water you will notice in verses 26-40 that as soon as they reached the other side a demon possessed man, the mad man of Gadara met him. God had directed Jesus’ ministry to crossover that lake to get to the other side because there was ministry work to be done there to a person in need. What if God has some place He wants you to pass over to, whether it is ministry, business, a financial opportunity, or Kingdom expansion work to be done? This is what could be at the other end of that pull of faith on our heart. It might involve facing jeopardy or risk to get there but that is one of the reasons we have faith. Without facing certain risks you could miss what God has for you. Faith is the victory that overcomes the world (1 John 5:4).

It is amazing to me that that many use faith to eliminate risk so they can become comfortable. If you think about it, we are always comfortable right before we go to sleep. Are we using faith only for creating our own comfortable lifestyle yet never facing the risks that go with the work of the Kingdom? Faith wasn’t given to us to remove us from facing risk. I think we need to look at risk differently. Risk needs to be viewed not as just the possibility of loss but as the possibility of gain. Risk gives us a chance to claim victory and victory means rejoicing. Facing risk with faith leads to the thrill of victory.