Home › #Abundant Life › ONLY JESUS DESERVES TO HAVE PREEMINENCE

ONLY JESUS DESERVES TO HAVE PREEMINENCE 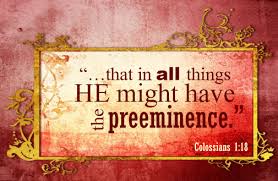 Colossians 1:16-18 For by him were all things created, that are in heaven, and that are in earth, visible and invisible, whether they be thrones, or dominions, or principalities, or powers: all things were created by him, and for him: 17 And he is before all things, and by him all things consist. 18 And he is the head of the body, the church: who is the beginning, the firstborn from the dead; THAT IN ALL THINGS HE MIGHT HAVE PREEMINENCE (to be first; to hold first place; have superior status).”
The book of Colossians was written by the Apostle Paul to address a heresy that had arisen in Colossae, corrupting the church. The heresy and philosophies of men created a limited and false view of Jesus’ humanity and deity. He refutes the false philosophy by unveiling Christ’s supremacy and preeminence in all things. There is not one part of life or one molecule in the universe that Jesus Christ should not permeate with His presence, wisdom, righteousness, and dominion including politics.

Giving Him preeminence is in effect giving His Word preeminence or putting it as the final authority to settle all issues. He is to have preeminence over all philosophies, traditions, doctrines of men, political parties, race, gender, sexual issues, socio-economic class issues, and all ideologies. Colossians 1:12-21 explains the reasons: