Home › #Believing › WHAT THE LAW DEMANDED, GOD BY HIS GRACE PROVIDED

WHAT THE LAW DEMANDED, GOD BY HIS GRACE PROVIDED 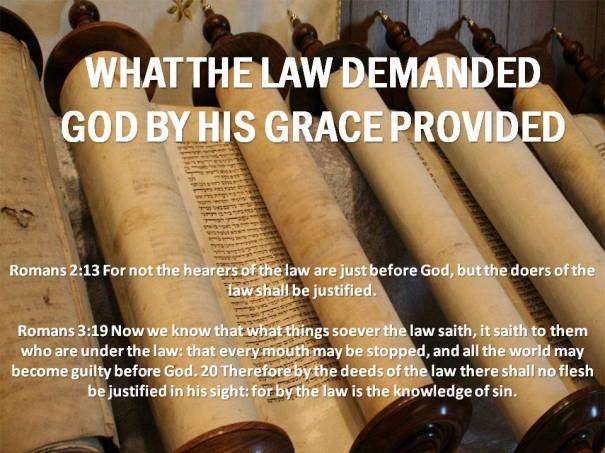 Romans 3:19 Now we know that what things soever the law saith, it saith to them who are under the law: that every mouth may be stopped, and all the world may become guilty before God. 20 Therefore by the deeds of the law there shall no flesh be justified in his sight: for by the law is the knowledge of sin. 21 But now the righteousness of God without the law is manifested, being witnessed by the law and the prophets; 22 Even the righteousness of God which is by faith of Jesus Christ unto all and upon all them that believe: for there is no difference.

The Bible declares that only the doers of the Law can be justified before God.  To be justified declared righteous, or proven innocent of ever breaking God’s Law would require a person to keep the Law in its entirety (James 2:10; Galatians 5:3, 4). To offend in just one point would mean to be guilty of the whole Law and an automatic curse would come upon you (Galatians 2:16; 3:10). Justification is taken from the Greek root word “righteous” so it has to do with righteousness. It describes a legal term in a court of law used as the act of declaring that a person is righteous. It is a legal declaration of innocence after examination of the facts and evidence of a case. A justified man is declared innocent and acquitted of any wrong doing or you could say proven innocent. A not guilty verdict is rendered in his behalf. He is not merely pardoned but acquitted of ever committing wrong.

Jesus’ deeds (or doing) of the law are imputed (charged/put to our account) to us at salvation so that:

We are legally proven innocent.

We are declared righteous.

ONLY THE DOERS OF THE LAW CAN BE JUSTIFIED BUT WHAT THE LAW DEMANDED, GOD BY HIS GRACE, PROVIDED