Home › #Bible Truth › A HEART AWAY FROM GOD, GOES AWAY FROM HIS HOUSE 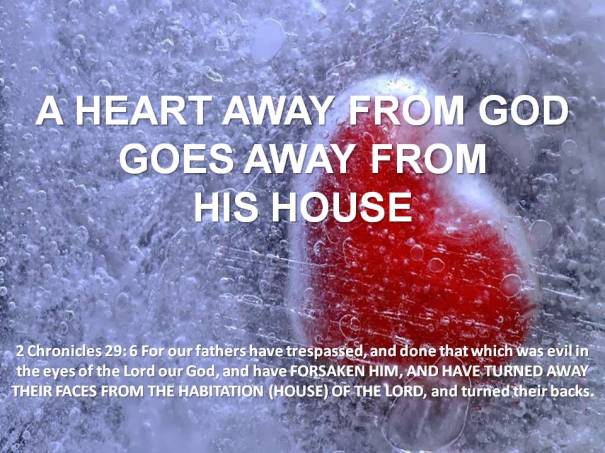 1 Timothy 3:15 But if I tarry long, that thou mayest know how thou oughtest to behave thyself in the house of God, which is the church of the living God, the pillar and ground of the truth.
2 Chronicles 29:1-7
Hezekiah began to reign when he was five and twenty years old, and he reigned nine and twenty years in Jerusalem. And his mother’s name was Abijah, the daughter of Zechariah. 2 And he did that which was right in the sight of the Lord, according to all that David his father had done. 3 He in the first year of his reign, in the first month, opened the doors of the house of the Lord, and repaired them. 4 And he brought in the priests and the Levites, and gathered them together into the east street, 5 And said unto them, Hear me, ye Levites, sanctify now yourselves, and sanctify the house of the Lord God of your fathers, and carry forth the filthiness out of the holy place. 6 For our fathers have trespassed, and done that which was evil in the eyes of the Lord our God, and have FORSAKEN HIM, AND HAVE TURNED AWAY THEIR FACES FROM THE HABITATION (HOUSE) OF THE LORD, AND TURNED THEIR BACKS. 7 Also they have shut up the doors of the porch, and put out the lamps, and have not burned incense nor offered burnt offerings in the holy place unto the God of Israel.
Hezekiah was the son of a Godless father (Ahaz) who endeavored to bring the kingdom back from the path of idolatry and ruin his father had taken the kingdom into. So often sins in a father are repeated in his son but Hezekiah reversed this backsliding. There is a great example and vivid lesson that is obvious in the generation that forsook the Lord from reading this passage as well as all of 2 Chronicles 29. The lesson is simple and clear: WHEN OUR HEART GOES AWAY FROM GOD, IT GOES AWAY FROM HIS HOUSE (Church) 2 Chronicles 29.
If you will continue to read you will see in the revival Hezekiah brought, that BECAUSE HIS HEART WAS RIGHT BEFORE THE LORD, he:

2 Chronicles 31:
v. 1: Destroyed the idols/high places dedicated to the worship of other gods;
v. 2: Restored ministry of the priests;
v. 3: Restored offerings;
v. 4: Restored giving to the ministry priests;
v. 5: Restored the tithe.
Assembling with the Body of Christ is a HEART issue even today. We are members of a Body called the Church and the Church is something bigger than the individual member. So often today’s believers try to justify their absence from assembling with the Body of Christ with cute little phrases like “It’s not about going to Church but being the Church,” but part of being the Church is going to Church. Some say, “But we’re the House of God,” but Paul told Timothy the House of God is also a place and it is also called the church ( 1 Timothy 3:15).
Jesus also said to seek first (not second, third, fourth…) the Kingdom of God and His righteousness. The Church is an expression of the Kingdom (which is to come) which now is the only visible part of it on Earth. Our assembling is a part of our visible witness of its priority, what is first in our lives, and what’s righteous. It is making a statement by our example that our God is worthy of our love and commitment. No true Christian is a special case that doesn’t need it or an exception to Hebrews 10:25 which says, “Not forsaking the assembling of ourselves together, as the manner (habit;custom) of some is; but exhorting one another: and so much the more, as ye see the day approaching.” It is only pride for a believer to think that they are the exception to two thousand and sixteen years of Church history that has proven otherwise.

HOW IS YOUR HEART?